Shadowland bosses and Eternals are two types of Shadow Fight 2 Bosses. Shadowland bosses are also called demons who break the law of the elders by breaking the shadow gates. Demon bosses fight in a single-player mode. Eternal players are awakened after opening the mysterious gates. They Fighting in multiplayer mode.

Demons bosses have their pasts and stories. By knowing all the skills and abilities of the Shadow Fight 2 Bosses you can beat them. You have three chances to fight to win against the boss.

Lynx is the first demon encountered specialist in Shadow Fight 2 Boss series. Lynx is the leader of a “The Order” group of assassins. First, beat the five bodyguards of the lynx to clear the way from fighting with them.

He uses ranged weapons. He also uses a smoke bomb to make himself invisible by throwing it. You won’t outright fight him, as you first have to defeat his five bodyguards. Defeat the lynx in the eclipse mode, they will reward you with his weapon.

Hermit is the second Boss in Shadow Fight 2. He has 5 disciples bodyguards. Hermit has a mysterious power, shown when they do Magic.

He also changes the range of weapons after every stage of fighting. The Hermit also has five bodyguards you should defeat his bodyguards before fighting him. It’s very hard to beat its strongest bodyguards. When you win with the Hermit the eclipse mode gives a weapon as a reward.

Butcher is the 3rd boss that is encountered in Shadow Fight 2. As Hermit, he has five bodyguards. The first bodyguard is Bird, who attempts the three Shadow, Sensei, and May. She leads the town by saying that it will take their breath out, for all. she attacks by escorting the destination but Shadow wants to defeat her. Bird defeats the other opponent Butcher’s Gang.

They use blood pole weapons, she also has decent range collections of weap. Her unique ability is very dangerous.These weapons help her to jump from the edge and drop on the screen. It becomes scarier when you roll or duck.

Widow is the 5th demon boss in Shadow Fight 2. She has five bodyguards named generated on animals, particularly of regions, Her bodyguards who are attracted by her magic and beauty, also grab the attention with the exception of Puma. She has the ability to teleport behind you with huge health damage.

During the teleport, you won’t be interrupted. Firstly you deal with five bodyguards before facing Widow. Her bodyguards are more powerful than what you defeated before. After Defeating her again in Eclipse mode you are rewarded as fan weapons. She is the one of the popular boss in the shadow fight 2 series

The second last demon boss is Shogun. He has a scary unique ability, which allows him to summon all his bodyguards. They will enter at both sides of the screen and stike you. Once the attack is done, they all fly upwards. you defeat him again in Eclipse mode by using his sword.

Titan is the main and last boss of Shadow Fight 2. They can mold someone’s memories and thoughts of the enemy. He has many mysterious powers which make him fearsome. When you fight with the shadow fight 2 last boss, you will be amazed at his powerful abilities

when it hits you, you will fly in the air and then slams you to the ground with massive damage. Titan also has five bodyguards but after defeating them, you must first battle with a mind-controlled May bodyguard.

First, make your own strong team to beat the Shadow Fight 2 Eternal bosses because these are the bosses of the underworld. You must win from the eternal bosses, the time of the fight is 45 secs. A minimum amount of damage can be reached to the Finishing Round. Here is the list of Multiplayer shadow fight 2 mode eternal bosses to defeat them and win the battles against opponents like Shadow Fight 3 Bosses. Shadow Fight 3 Bosses are a very unique style of fighting with the players. Shadow fight 3 Allows customizing their character and its fighting abilities. You can fight with your own style and win the battle. This game has a three-dimensional fighting character that looks lifelike. Heroes have epic fighting styles, fighting is more challenging… 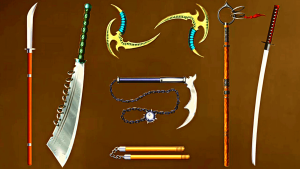